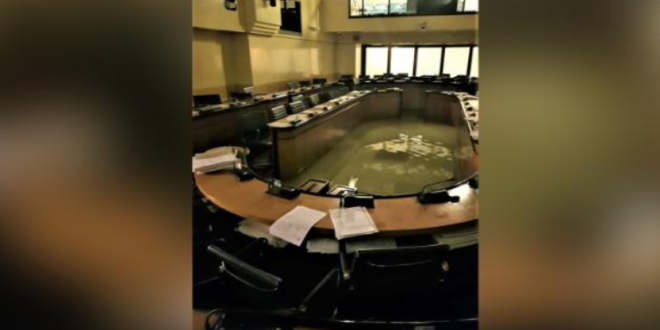 Veneto regional council, which is located on Venice’s Grand Canal, was flooded for the first time in its history on Tuesday night — just after it rejected measures to combat climate change. The historic Italian city has been brought to its knees this week by the worst flooding there in more than 50 years.

And the council chamber in Ferro Fini Palace started to take in water around 10 p.m. local time, as councilors were debating the 2020 regional budget, Democratic Party councilor Andrea Zanoni said in a long Facebook post.

“Ironically, the chamber was flooded two minutes after the majority League, Brothers of Italy, and Forza Italia parties rejected our amendments to tackle climate change,” Zanoni, who is deputy chairman of the environment committee, said in the post, which also has photographs of the room under water.

Veneto regional council in Venice is flooded for the first time in its history after rejecting measures to combat climate change https://t.co/jBbYhro2NX pic.twitter.com/6WrhlEqhxT

Remember in 2017, scientists were saying Venice would be under water in two years due to global warming? pic.twitter.com/O7uGBRIetq

Photo was sent to us by Andrea Farruggio. pic.twitter.com/WgqmipxmZt