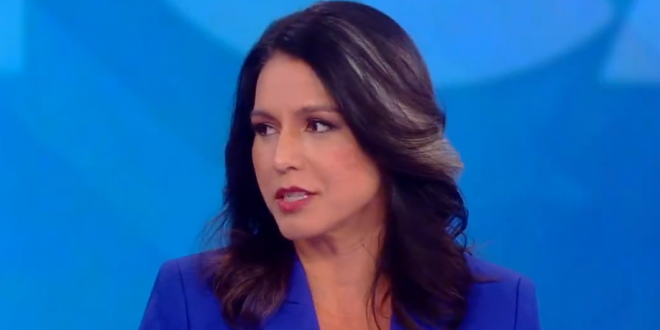 In her third appearance on the show this year, Hawaii Rep. Tulsi Gabbard, appeared on “The View” Wednesday fighting back against those who have questioned her loyalty, calling the comments made against her “demeaning.”

“It’s offensive to me as a soldier, as an American, as a member of congress, as a veteran, and frankly as a woman, to be so demeaned in this way,” Gabbard told the hosts.

“I am a patriot, I love our country. I have dedicated almost my entire adult life to protecting the safety, security and freedom of all Americans in this country.” When asked by the hosts if she was running as a third party candidate, Gabbard said “I’m running to build a New Democratic Party”

Rep. Tulsi Gabbard says she will not enter the 2020 race as a third-party candidate: “I’m running to build a new Democratic party.” https://t.co/aMKSCcYgCv pic.twitter.com/u8pd3HREPD

Previous Right Wing Activist Ralph Reed: If Christians Don’t Rise Up For Trump 2020, They Will Deserve To Be Persecuted
Next REPORT: Jeff Sessions About To Launch Senate Bid