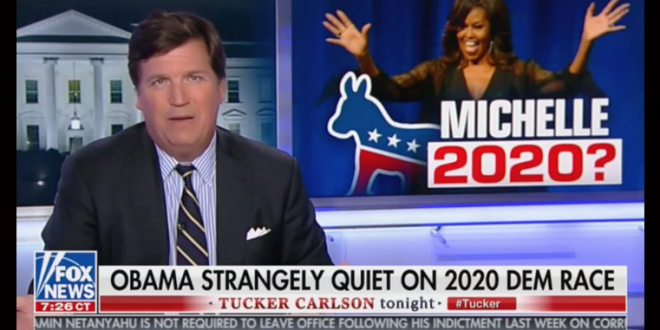 “Don’t bet against Michelle Obama,” Carlson said on his show Monday night. “Last week, the former first lady issued a statement saying that she has no interest in being president. That’s what she claimed. But there are signs that that’s not true.”

“Obama’s presidential memoir was also supposed to come out this year. Now, its release has been delayed until the middle of the Democratic primaries,” Carlson said. “In other words, at exactly the moment when Democrats will be thinking deeply about how to beat Donald Trump, America will be talking about the Obamas.”

Long listen, but we are not buying it, Hillary would jump in before this. pic.twitter.com/omPetVRSkw

Previous Bloomberg: I’ve Got The Money To Get Things Done
Next Musk To Testify In Own Defense In Defamation Suit