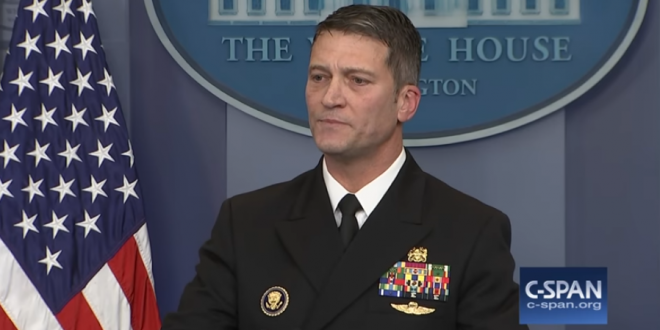 Navy Rear Adm. Ronny Jackson is considering a run for Congress in Texas, two sources familiar with his plans said Friday. Jackson was the chief White House physician in 2018, when President Donald Trump nominated him to be Veterans Affairs secretary.

But Jackson withdrew his nomination from consideration amid allegations that he abused alcohol and mishandled prescription drugs, although he said at the time the charges were “completely false and fabricated.”

A Texas native, Jackson is eyeing a run as a Republican in the 13th District, which opened after longtime GOP incumbent Mac Thornberry announced his retirement. Trump won the district by 63 points in 2016 and Inside Elections with Nathan L. Gonzales rates the race Solid Republican.

I know it’s far from the most important thing we have to do, but now that Ronny Jackson has withdrawn from consideration for VA Secretary, can we get someone to weigh Trump for real so we as a nation can move past this “239 lbs” business?

I’m a parody account made after the real Ronny Jackson declared Trump the healthiest human alive.

The number of real veterans reaching out to me, pleading for help, has never made me sadder.

They are not getting the help they need. We are better than this.

When Dr. Ronny Jackson confirmed President Trump is mentally and physically the healthiest president in the history of America, anti-depressant prescriptions at the local pharmacy near @CNN quadrupled!!!! pic.twitter.com/ctM2FKwwuI