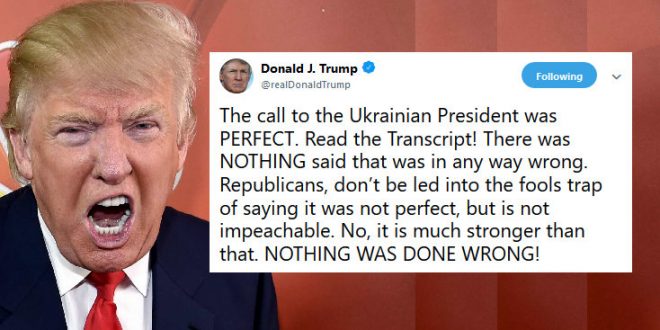 Trump Warns Republicans Not To Budge On Ukraine

President Trump on Sunday called on Republicans to fully support his “perfect” Ukraine call and not just attack the impeachment inquiry.

Trump appeared to take aim at a number of party members starting to attack his July 25 chat with the Ukrainian president while still arguing it was not deserving of ousting an elected president.

His Tweet came just hours after Rep. Mac Thornberry (R-Texas) raised his clear concerns with the call during an appearance on ABC.  “I believe it was inappropriate. I do not believe it was impeachable,” he told the show.

The call to the Ukrainian President was PERFECT. Read the Transcript! There was NOTHING said that was in any way wrong. Republicans, don’t be led into the fools trap of saying it was not perfect, but is not impeachable. No, it is much stronger than that. NOTHING WAS DONE WRONG!

Corrupt politician Adam Schiff wants people from the White House to testify in his and Pelosi’s disgraceful Witch Hunt, yet he will not allow a White House lawyer, nor will he allow ANY of our requested witnesses. This is a first in due process and Congressional history!

Trump has demanded loyalty from congressional Republicans & now we’re getting a look at what that might look like at impeachment inquiry public hearings. GOP lawmakers asking Dems to let them call 9 categories of ppl incl, Hunter Biden & whistleblowers. https://t.co/wtey0p9wSE