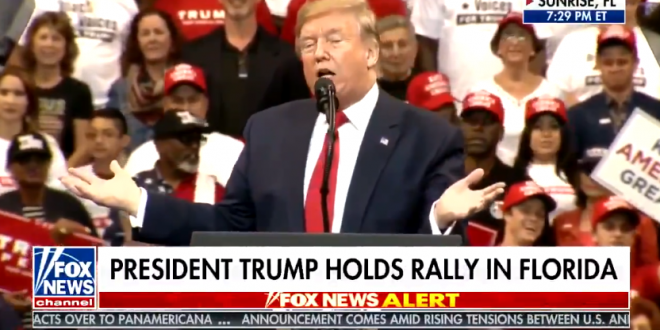 Donald Trump stopped in Sunrise, Florida, to hold a campaign rally before heading about one hour north to his Mar-a-Lago resort for the Thanksgiving holiday.

But the campaign rally proved to be a strange one, as video captured Trump slurring the words “stock market,” and later claiming that in the 2016 election he somehow defeated “Barack Hussein Obama.” Of course, the then-incumbent President Obama did not run in the 2016 election.

Trump also blasted coverage of his hospital visit on November 16 by “that stupid, corrupt, horrible CNN.” Trump told the crowd that he felt “great,” and if he didn’t, “I wouldn’t be ranting and raving to 22,000 people.”

Space Force, the banal frontier. These are the voyages of the Sock Rocket. It’s futile mission to seek out Gingrichian Moonbases, discover Ted Cruzian Space Pirates & find Gohmertian Gay Space Colonies. To boldly pretend, like no one has imagined before pic.twitter.com/7imYihPHEM

Previous AOC’s 2020 Campaign Outraises All House Democrats
Next Junior’s Contest: Ruin Thanksgiving To Own The Libs