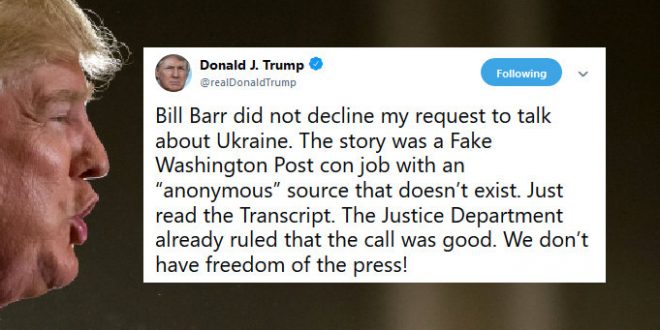 Trump Rages: “We Don’t Have Freedom Of The Press!”

Trump dismissed as “FAKE NEWS” reports that he wanted Barr to hold a news conference declaring that Trump broke no laws during a phone call in which he pressed his Ukrainian counterpart to investigate the Bidens.

According to a story first reported by The Washington Post, Barr ultimately declined to do so, and Trump has mentioned Barr’s demurral to associates in recent weeks, saying he wished Barr would have held the news conference. Other outlets, including the New York Times and The Wall Street Journal, later matched the Post report.

“Just read the Transcript,” Trump continued, referring to the rough transcript released by the White House of his July call with Zelensky. “The Justice Department already ruled that the call was good. We don’t have freedom of the press!”

Bill Barr did not decline my request to talk about Ukraine. The story was a Fake Washington Post con job with an “anonymous” source that doesn’t exist. Just read the Transcript. The Justice Department already ruled that the call was good. We don’t have freedom of the press!

Trump in true Orwellian form claims media printing things he doesn’t like is NOT freedom of the press. Reminder nearly 50% of Reps agree Trump should be able to close media outlets that are unfair to him. These people are more loyal to Trump than US Const https://t.co/aznMhJRRCU

We do have freedom of the press, actually.

It’s in the Constitution, that thing you’ve never read.

Previous GOP Senator On Pelosi: It Must Suck To Be That Dumb
Next Feds Sue Gilead Over Patents On HIV-Prevention Drugs