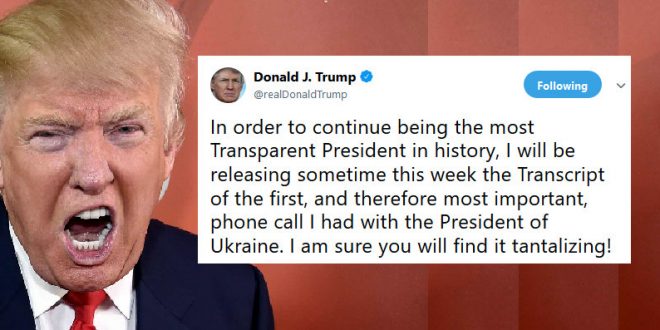 President Trump said he would release the transcript of his first call with Ukrainian President Volodymyr Zelensky this week, describing it as more important than his second call with the leader that is at the center of the House impeachment inquiry.

Trump indicated last week that he would was open to publicly releasing a transcript of his April call with Zelensky, telling reporters over the weekend it could be done Tuesday.

As many have noted, Trump is attempting to focus everything on his phone calls even though multiple people have confirmed his extortion plot.

In order to continue being the most Transparent President in history, I will be releasing sometime this week the Transcript of the first, and therefore most important, phone call I had with the President of Ukraine. I am sure you will find it tantalizing!

Previous Top Pentagon Official Testifies Trump Froze Ukraine Aid
Next Rex Tillerson Hits Back At Haley’s Claim He Undermined Trump: She Didn’t Even Attend Most Of My Meetings