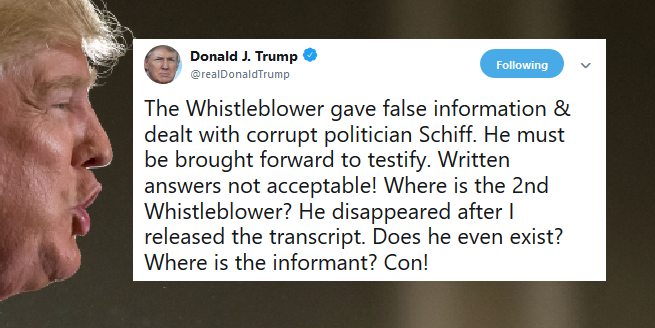 President Donald Trump’s obsession with the whistleblower’s identity is intensifying, as he prodded White House reporters to investigate and release the person’s identity Sunday.

“As you know, certain of the media released information about a man that they said was the whistleblower; I don’t know if that’s true or not,” he said. “But what they said is he’s an Obama person. It was involved with Brennan, Susan Rice, which means Obama.”

“If he’s the whistleblower, he has no credibility because he’s a Brennan guy, he’s a Susan Rice guy, he’s an Obama guy, and he hates Trump, and he’s a radical,” he continued. “Now, maybe it’s not him. But if it’s him, you guys ought to release the information.”

The Whistleblower gave false information & dealt with corrupt politician Schiff. He must be brought forward to testify. Written answers not acceptable! Where is the 2nd Whistleblower? He disappeared after I released the transcript. Does he even exist? Where is the informant? Con!

“There is no Whistleblower. There is someone with an agenda against Donald Trump. What he was blowing the whistle on didn’t happen. We have the transcript of the call. This is all a farce and no Republican should forget that.” @dbongino @foxandfriends