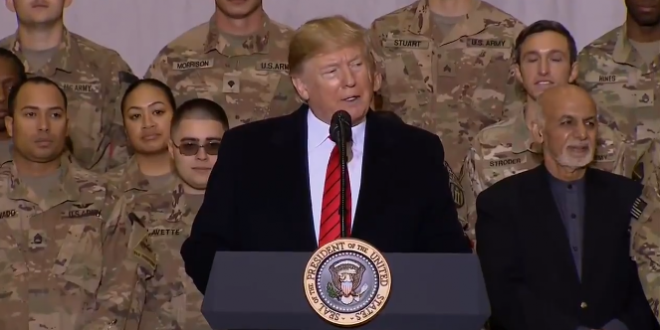 President Trump paid an unannounced Thanksgiving visit to American troops in Afghanistan on Thursday, and said that he had restarted peace negotiations with the Taliban less than three months after he scuttled talks with the group. “The Taliban wants to make a deal, and we’re meeting with them,” Mr. Trump said here during a meeting with Afghanistan’s president, Ashraf Ghani.

“We’re going to stay until such time as we have a deal, or we have total victory, and they want to make to make a deal very badly,” said Mr. Trump, who reaffirmed his desire to reduce America’s troop presence here to 8,600, down from about 12,000. Mr. Trump made his first visit to Afghanistan under a shroud of secrecy, arriving in a darkened airplane on a trip that the White House had concealed from his public schedule for security reasons.

During his whirlwind trip, the president served turkey to troops. Military personnel told reporters on the ground there were roughly 500 troops in the rooms where the president went.

“There’s nowhere I’d rather celebrate this Thanksgiving than right here with the toughest, strongest, best and bravest warriors on the face of the earth – you are indeed that,” the president told the troops.

Last year, just after Christmas, Mr. Trump made his first-ever visit to a combat zone as commander-in-chief when he and first lady Melania touched down in Iraq to pay a surprise visit to U.S. troops based there.

BREAKING: President Trump makes remarks during a surprise Thanksgiving visit to US troops in Afghanistan, his first trip to the country. https://t.co/Hn1vs1CSZK pic.twitter.com/hvhUDVQgZT

#NEW: Pres. Trump during a surprise Thanksgiving visit to the troops in Afghanistan, says peace talks with the Taliban have resumed:

“The Taliban wants to make a deal… and they only want to make a deal because you’re doing a great job.”pic.twitter.com/hbIGWHh20h