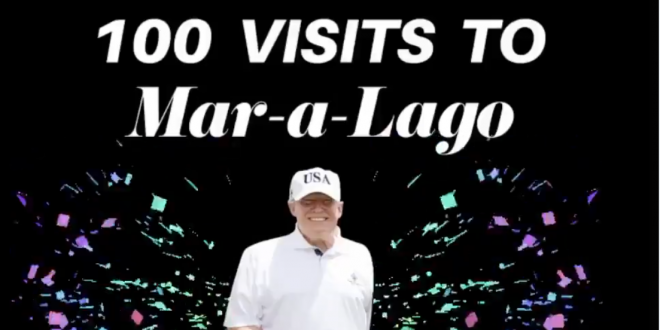 Via the watchdog group CREW:

President Trump hit an important milestone as he returned to Florida over the Thanksgiving holiday: 100 visits to Mar-a-Lago. In 1,040 days as president, he has prioritized visiting his properties over the course of his presidency, making time for nearly 400 visits to the businesses that he still owns and profits from.

Of all of his properties, it appears that Mar-a-Lago is his favorite to funnel untold sums of taxpayer money to, even rebranding Mar-a-Lago the “Winter White House.”

The president has visited Mar-a-Lago nearly 10% of the days he’s been in office, despite the fact that his use of the resort has prompted concerns about national security, profiteering, influence peddling and transparency.

Now that Mar-a-Lago is Trump’s official residence, we can only expect more visits to the resort. While every President is entitled to maintain and visit a personal residence, Trump is the first modern president to routinely allow the funneling of federal and foreign government dollars to his pocket in this way.

In case you were wondering how much Trump cares about corruption, he just arrived at Mar-a-Lago for his 100th visit to the resort that he still owns and profits from. https://t.co/8ls0H2MlpF pic.twitter.com/3EcfpZYmgE