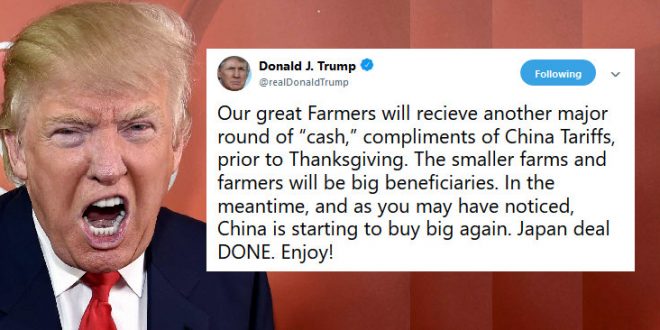 Trump Lies: US Farmers Will Get “Cash” From Tariffs

President Donald Trump on Sunday welcomed a “cash” payout to American farmers before the Thanksgiving Day holiday that he attributed to China tariffs, but that money actually is part of a U.S. government aid package. The U.S. Department of Agriculture said on Friday it will begin making a second round of 2019 trade aid payments to U.S. farmers next week.

The payments are the second part of a three-tranche $16 billion aid package announced in May to compensate farmers for the U.S.-China trade war. China imposed tariffs on key U.S. agriculture exports including soybeans and pork last year after Trump’s administration levied duties on Chinese goods.

Our great Farmers will recieve another major round of “cash,” compliments of China Tariffs, prior to Thanksgiving. The smaller farms and farmers will be big beneficiaries. In the meantime, and as you may have noticed, China is starting to buy big again. Japan deal DONE. Enjoy!

let’s un-Fox this tweet:
1. China doesn’t pay tariffs, US taxpayers do
2. farmers are being bailed out by US taxpayers
3. that’s socialism, by the way
4. there is no indication that China is “buying big again”
5. there is no Japan deal
6. reason for hospitalization still secret

Translation: Our farmers will receive another round of corporate welfare using your tax dollars because Trump’s tariffs failed.

Previous Sen. Ron Johnson: Trump’s Attempt To Extort Ukraine Should Have Been Taken Care Of “Behind The Scenes”
Next Bloomberg Apologizes For Stop-And-Frisk Policy