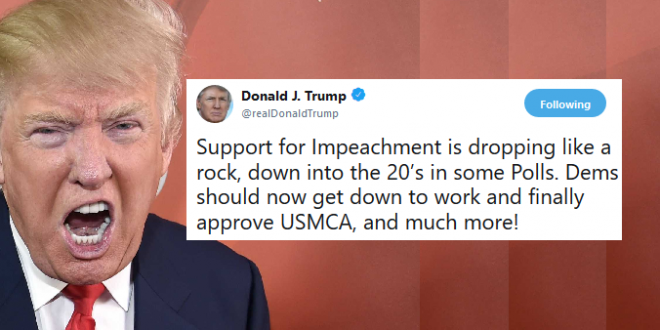 President Trump is citing impeachment numbers that seem to exist nowhere but his Twitter feed. Trump on Monday morning boasted that “support for impeachment is dropping like a rock,” claiming that it’s “down into the 20s” in some polls.

But he didn’t cite a single example, and no one’s sure where he’s getting that number from considering virtually every poll has shown support for impeachment in the 40s, with FiveThirtyEight’s poll tracker showing it’s at an average of 46.3 percent support.

Support for Impeachment is dropping like a rock, down into the 20’s in some Polls. Dems should now get down to work and finally approve USMCA, and much more!