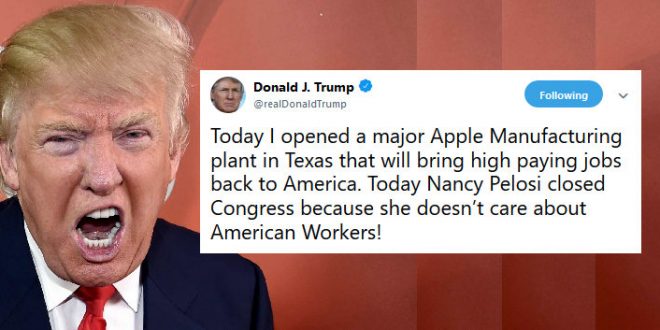 Trump Lies About Apple Plant That Opened In 2013

It was a pretty typical publicity event, until the end. Mr. Trump walked in front of the news cameras and took credit for the plant, suggesting it had opened that day. “For me, this is a very special day,” he said. Mr. Cook stood next to him, stone-faced. The plant has been making Apple computers since 2013.

Immediately after Mr. Trump’s comments, Mr. Cook thanked the president and his staff. “I’m grateful for their support in pulling today off and getting us to this far. It would not be possible without them,” he said. He did not correct the record.

Today I opened a major Apple Manufacturing plant in Texas that will bring high paying jobs back to America. Today Nancy Pelosi closed Congress because she doesn’t care about American Workers!

I suppose it would be asking too much for Tim Cook simply to have politely stepped aside and away from the president when Trump turned their silly Apple promo event into a partisan attack on Democrats, an assault on the media, and lies about the weighty question of impeachment.

#APFactCheck: President Trump falsely claims that he opened an Apple plant Wednesday in Texas. The plant has been in business for years.https://t.co/9xHhNPRHdg

President Trump: “I said, ‘Someday we’re going to see Apple building plants in our country, not in China. And thats what’s happening.”

This is false. Apple hasn’t built any plants in the U.S. & still makes the vast majority of its products in China.