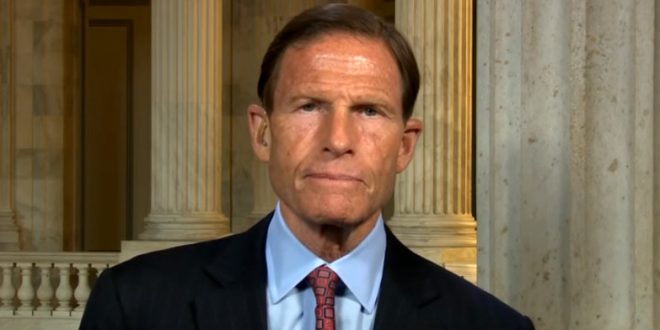 Trump Gets Bill To Make Animal Abuse A Federal Crime

The U.S. Senate has passed a bill making certain types of animal cruelty a federal felony. The Senate unanimously passed the Preventing Animal Cruelty and Torture (PACT) Act, which criminalizes certain acts of animal cruelty. The bipartisan bill will now be sent to President Donald Trump’s desk for his signature.

“Passing this legislation is a major victory in the effort to stop animal cruelty and make our communities safer,” said Sen. Pat Toomey, who sponsored the bill in the Senate along with Sen. Richard Blumenthal [photo]. “There is no place in a civilized society for maiming and torturing animals – period,” Blumenthal added.

I’m not including the images that some outlets are including with this story. You’re welcome.

The Senate has unanimously passed a bill that makes animal cruelty a federal felony.

Under the PACT Act, a person can be prosecuted for crushing, burning, drowning, suffocating and impaling animals and sexually exploiting them. https://t.co/H3iuEsRsKn

BREAKING NEWS: The US Senate just passed legislation known as the PACT Act that would make many acts of animal cruelty a federal felony offense.

Now all that’s needed is for @realDonaldTrump to sign this historic animal rights law into effect.https://t.co/MjGYIjcuXV

Previous Cultists Tell CNN They’d Likely Be Okay With Trump Shooting Someone: Depends On Why Trump Shot Him
Next New White House Hire Launches Project To Protect Trump From Witches And Demons During Campaign