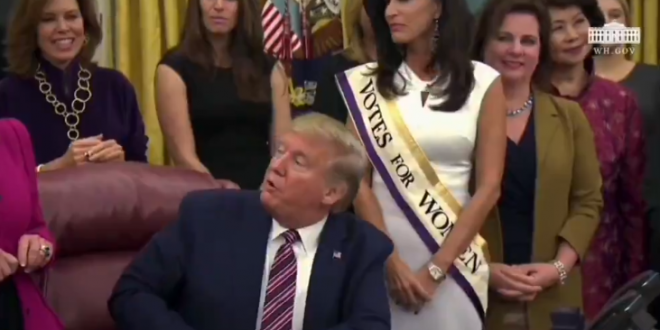 Trump Doesn’t Understand How Time Works: Why Didn’t We Celebrate This Centennial A Long Time Ago?

Does Donald Trump know what defines a centennial? The question arose on Monday during a White House event commemorating the passage of a bill honoring the women’s suffrage movement.

The Women’s Suffrage Centennial Commemorative Coin Act, which directs the Treasury Department to mint up to 400,000 $1 silver coins celebrating the 19th Amendment, passed with unanimous consent in Congress and is one of the least controversial bills to land on the president’s desk.

But as Trump opened his mouth in an attempt to lavish praise on himself for the bill—on its own, an absurd moment—trouble quickly arrived. “I’m curious,” he asked from the Oval Office, “why wasn’t it done a long time ago? I guess the answer to that is because now I’m president, we get things done.”

The task of explaining to Trump that “centennial” means “100th anniversary” fell to Republican Senator Marsha Blackburn. Mystery solved! They’re observing the women’s suffrage centennial now because next year is the centennial. That is how time works.

Even after this clear accounting, Trump nonetheless was still confused. “So why wasn’t this done a long time ago — years ago?,” he asked again.

At this point, one of Trump’s appointees told him that “it started out with you nominating Kay Coles James and myself as the U.S. treasurer on the commission.”

“I’m curious why wasn’t it done a long time ago? And also, I guess the answer to that is because now I’m president, we get things done.”

Previous Linda Harvey: LGBTs Can Never Celebrate Thanksgiving
Next Bolton: National Security Is Under Attack From Within