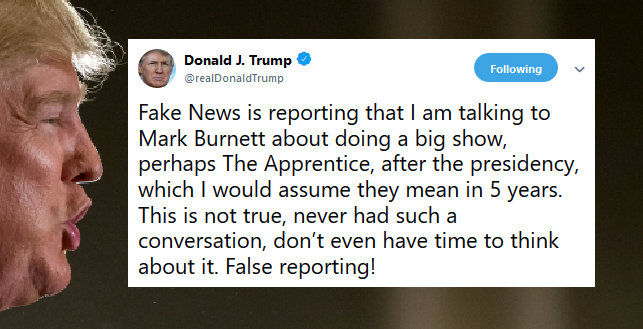 President Trump in an early morning tweet on Saturday dismissed a report that he and “Apprentice” creator Mark Burnett are discussing another show. The Daily Beast reported on Thursday that Trump and Burnett were discussing their next show.

The news outlet, citing three unidentified sources, reported that Trump and Burnett have kept in contact since the former reality TV star and real estate magnate was elected to the Oval Office. The two have also pitched each other on possible projects after Trump’s presidency ends, according to the Daily Beast.

Trump has frequently cited his tenure as “Apprentice” host on the campaign trail, touting it as a top reality television show and bashing replacement host Arnold Schwarzenegger for the dip the ratings saw after his departure.

Fake News is reporting that I am talking to Mark Burnett about doing a big show, perhaps The Apprentice, after the presidency, which I would assume they mean in 5 years. This is not true, never had such a conversation, don’t even have time to think about it. False reporting!

If Trump goes on Twitter to say something isn’t true, it’s the best way to tell it’s actually true.

Though it’s still unclear how Trump would do The Apprentice after he’s out of the White House.

I mean, it’s hard to fit a whole camera crew in a jail cell.