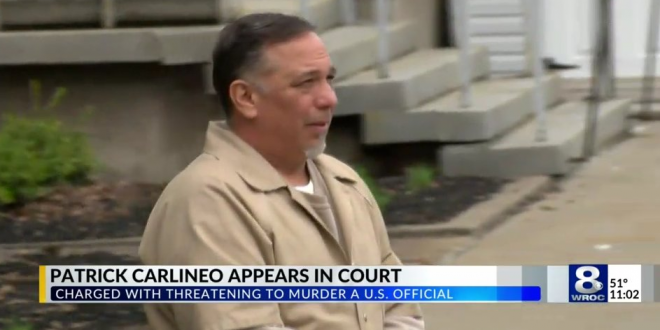 A western New York man pleaded guilty Monday to threatening to kill U.S. Rep. Ilhan Omar of Minnesota. Patrick Carlineo entered the plea Monday in Rochester, admitting to charges that carry up to 10 years in prison. His sentencing is set for Feb. 14.

Prosecutors say the 55-year-old called Omar’s office March 21, told a staffer the congresswoman was a “terrorist” and threatened to shoot her. Carlineo’s lawyer, Sonya Zoghlin, says Carlineo is passionate about his political beliefs and his right to express them.

Carlineo later told the FBI that he is a patriot, hates people he perceives to be radical Muslims in the U.S. government, and loves Republican President Donald Trump, according to a criminal complaint.

According to the criminal complaint filed in federal court against Patrick Carlineo, the threatening phone call was made to Minnesota Rep. Ilhan Omar’s office on March 21, 2019, about 12:20 p.m.

According to the complaint, Carlineo identified himself as Pat Carlineo and said to an Omar staff member, “Do you work for the Muslim brotherhood? Why are you working for her, she’s a f*cking terrorist. I’ll put a bullet in her f*cking skull.”

The staff member told the FBI that Carlineo sounded angry, but spelled his name and provided contact information. Investigators traced the phone used to a woman in New York and an address where Carlineo lives, according to court documents.