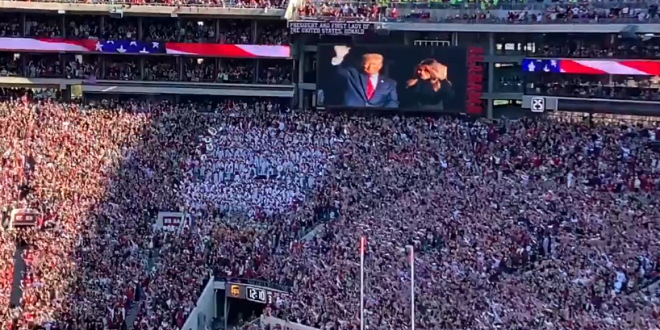 President Donald Trump knew where to go Saturday for home field advantage, finding comfort in the Deep South with college football fans cheering the nation’s top two teams — and him.

His reception at the showdown between Louisiana State and Alabama contrasted with the scene at Game 5 of the World Series in Washington, where he was booed, and the mixed response to his appearance at a martial arts fight in New York.

Trump, sitting one tier above the field, waved as fans turned around to look up at the president. He smiled, gave a thumbs-up a few times and threw a couple of fist bumps into the air as the Alabama fans waved red and white pompoms in response. First lady Melania Trump got an equally enthusiastic welcome.

Trump retweeted all of these below.

Alabama loves President @realDonaldTrump. This is what the fake news media won’t show you. #MAGA 🇺🇸pic.twitter.com/qsAkePqrae

But the Fake News will never show this. Thank you! https://t.co/T8grDsDRvJ

The south knows what’s what! https://t.co/3vyYTsKQBq

A couple people boo President Trump at the Nationals game in DC:

The entire stadium cheering for President Trump at the LSU/Bama game:

Such an amazing game & place! https://t.co/dGmXYxgKV5