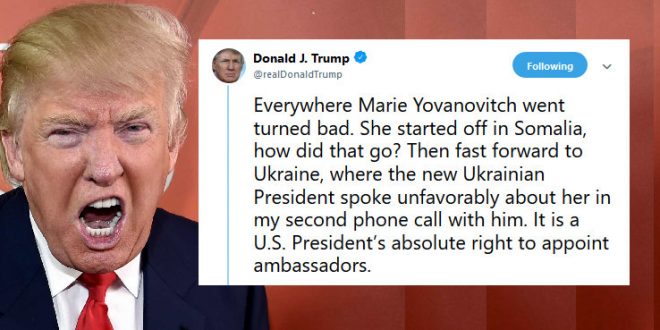 Trump has sent off a two-part tweet questioning the professional reputation of Maria Yovanovitch as the former US ambassador to Ukraine publicly testifies in the impeachment inquiry. Yovanovitch, a longtime diplomat, has served in several “hardship posts,” including Somalia as the country was suffering a civil war.

In reality, Yovanovitch has been widely lauded by her fellow diplomats as a model civil servant, and even deputy secretary of state John Sullivan told her she had “done nothing wrong” when he dismissed her from Kyiv.

Everywhere Marie Yovanovitch went turned bad. She started off in Somalia, how did that go? Then fast forward to Ukraine, where the new Ukrainian President spoke unfavorably about her in my second phone call with him. It is a U.S. President’s absolute right to appoint ambassadors.

….They call it “serving at the pleasure of the President.” The U.S. now has a very strong and powerful foreign policy, much different than proceeding administrations. It is called, quite simply, America First! With all of that, however, I have done FAR more for Ukraine than O.

Someone—SOMEONE—in the WH press pool: Please ask Trump to name the president of Somalia and explain what has happened in that country in recent decades. Forget about what Yovanovitch’s efforts might have been. Just tell us a little bit about Somalia. https://t.co/iV39NSuhsO

You send diplomats to difficult countries to do difficult work. Trump during Yovanovitch’s testimony tries to claim SHE caused Somalia and Ukraine’s problems https://t.co/OATQfBsq14

Schiff asks Yovanovitch to respond to Trump's tweet, posted during her hearing, claiming that everywhere she worked "turned bad"

Yovanovitch: "I don't think I have such powers" https://t.co/qNx16IztcL pic.twitter.com/xmAEkTJGpD