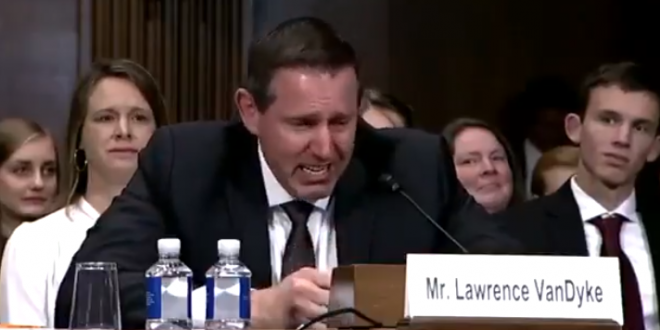 Justice may be blind, but the American Bar Association is not. That’s the biggest takeaway from Wednesday’s Senate hearing, when Ninth Circuit Court nominee Lawrence VanDyke became the ABA’s latest contestant on “conservatives don’t have talent.” Like most of this president’s picks, VanDyke probably braced himself for the Kavanaugh Treatment. But he never imagined the country’s largest attorney organization would stoop to label him “not qualified.”

At one point, the ABA even attacked VanDyke’s religious beliefs, implying that he wouldn’t be fair to members of the LGBTQ community—a charge so vicious and unfounded that Lawrence broke down in tears when Senator Josh Hawley (R-Mo.) asked him about it. “I did not say that,” he insisted, his voice breaking. “I do not believe that. It is a fundamental belief of mine that all people are created in the image of God and they should all be treated with dignity and respect.”

Thanks to this administration, groups like the ABA—who’ve been hiding out as “neutral” parties for years—are starting to be exposed for their unapologetic left-leaning stance. As painful as this parade of character assassination has been for the president’s picks, it could force the Senate to reconsider how it conducts its confirmation business. If not, this process—one that’s stood up to centuries of partisanship—may never be the same.

Two days ago I reminded you of VanDyke’s extensive history of battling LGBT rights in the courts:

Mr. VanDyke has represented, given speeches to, and worked for the homophobic Alliance Defending Freedom. Mr. VanDyke has attacked LGBTQ equality on multiple fronts throughout the past 15 years, beginning with a strident, anti-marriage equality op-ed he wrote in 2004.

He asserted that “children on average fare best in stable, two parent families” and “[t]his, combined with the correlative evidence of the decline in the family unit in Scandinavia, where de facto same-sex marriage has been around for about a decade, does provide ample reason for concern that same-sex marriage will hurt families, and consequentially children and society.”

He complained that in Canada, “courts are forcing same-sex marriage on the populace;” in England, “police investigated a bishop for his advocacy of the view that homosexuals can leave the homosexual lifestyle;” and that “Sweden has just passed a sweeping ‘hate crimes’ law forbidding criticism of homosexuality.”

He declared that “the trend of intolerance towards religion as homosexual ‘rights’ become legally entrenched is not merely an overseas phenomenon,” and he criticized the “chimera of ‘tolerance’ affiliated with homosexual rights.”

In 2010, Mr. VanDyke authored an amicus brief in the case Christian Legal Society v. Martinez, where he argued that college student groups had a First Amendment right to exclude LGBTQ students from membership. The Supreme Court rejected that position and ruled in favor of LGBTQ students. It is telling that on his Senate questionnaire, Mr. VanDyke listed this as one of the ten most significant cases of his career.

In 2013, while serving as the Montana Solicitor General, Mr. VanDyke advocated for joining amicus briefs that attacked LGBTQ equality. In his brief in Hollingsworth v. Perry, where he defended state bans on marriage equality, Mr. VanDyke argued that “a state’s decision to ratify the sexual union between a man and a woman confirms a deeply significant understanding of human relationships and encourages such unions as the standard for the human family.”

In his brief in United States v. Windsor, Mr. VanDyke defended the Defense of Marriage Act, which prevented the federal government from recognizing any marriages between gay or lesbian couples for the purpose of federal laws or programs, even if those couples were considered legally married by their home state.

Previous Special Interest Groups Have Held 100+ Lavish Events At Trump Properties: Private Prisons, Big Oil, And More
Next How Sites Use “Fingerprinting” To Track Your Actions