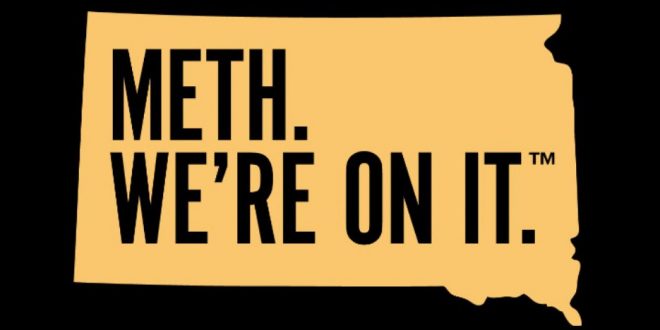 Gov. Kristi Noem has a message for South Dakota: “Meth. We’re On It.” Noem launched her new anti-meth campaign on Monday to bring awareness to the meth epidemic in South Dakota that will include a new TV ad, billboards, posters and website. The campaign’s motto features the phrase, “Meth. We’re on it,” over an outline of South Dakota, and the ad and posters feature people of differing in ages and races saying, “I’m on meth.”

South Dakota’s meth crisis is “growing at an alarming rate” and impacts every community in the state, Noem said in the campaign’s public service announcement. “This is our problem and together, we need to get on it,” Noem said. Broadhead Co., a marketing and ad agency in Minneapolis, created the “Meth. We’re On It.” campaign. The state’s Department of Social Services paid the agency just short of $449,000 this fall, according to the state’s finances website.

Noem, a Republican, served eight years in the US House before being elected governor, arriving in 2010 on the anti-Obama Tea Party wave. She did nothing during those eight years to warrant an appearance on JMG.

Guy #1: “man remember that Sd don’t jerk and drive ad? That was wild! Can’t see them topping that.”
State Employee: ($449,999 later) “hold my beer I got you fam” #methimonit pic.twitter.com/9SCZzRKgee

While we focus on South Dakota’s “Meth. We’re on it.” ad campaign, we should not forget the state’s failed “Don’t Jerk and Drive” campaign from 2014.https://t.co/hFciHO5Qc7 pic.twitter.com/KQLpngeTbO

The rest of the country: "Hey, um, are you guys OK over there?" https://t.co/wX5aNWYoX3