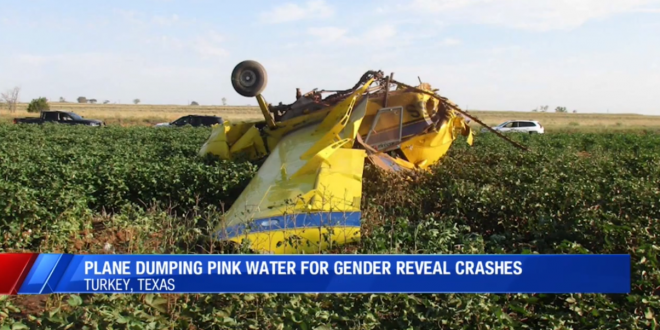 In yet another case of a gender reveal gone horribly wrong, an airplane crashed mid-reveal after the pilot dumped about 350 gallons of pink water out of the aircraft, which stalled and hit the ground. The pilot and a passenger were flying in the one-seat aircraft during the Sept. 7 incident in Turkey, Texas.

According to a National Transportation Safety Board report, the airplane, which was flying at a low altitude, “got too slow” after discharging the pink water and “aerodynamically stalled, impacted terrain, and came to rest inverted.” There was “substantial damage” to the plane, the report said, and the passenger sustained minor injuries.

Other recent gender reveal mishaps have included a fatal pipe bomb explosion and a massive wildfire.