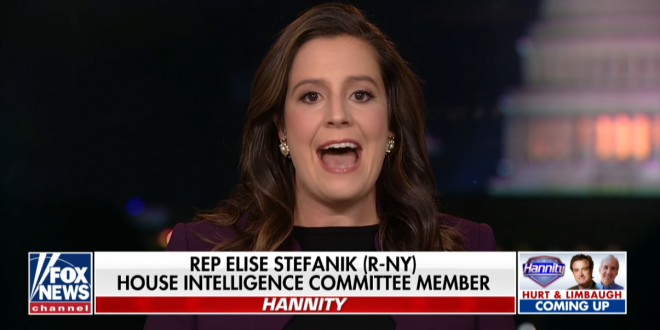 On Fox News Thursday night, Rep. Elise Stefanik made sure to tell viewers about a website where they could “step up” and donate to her campaign. After her appearance, the New York Republican announced she raised a staggering $500,000 in less than two hours.

Stefanik’s fundraising push is an early test of whether House Republicans, using a new online fundraising platform Stefanik once questioned, can capitalize on national attention to bring in campaign cash. On Fox News Friday morning Trump said Stefanik “has become a star.”

Stefanik’s campaign has declined to say how much she has raised since the hearings started, but if Thursday night is any indication, she could post a big number for the year’s final fundraising quarter, which ends Dec. 31.

The anti-Stefankik hashtag #byebyeElise has been trending at #1 on Twitter for most of today.

Getting the Hannity seal of approval tonight, Rep. Elise Stefanik (R-NY) plays it up for all its worth, claiming that she's "been attacked by the Hollywood left" and therefore needs the "American people to step up" and donate money to her congressional campaign. pic.twitter.com/GtCCsPbJaz

You wanted to ask a question out of order. You don’t get to rewrite the rules on the fly. You got your five minutes. Enjoyed your lying though. https://t.co/BCtrBSZAKw

THANK YOU to all of my supporters — we raised $500K in UNDER 2 HOURS last night! I am deeply honored and overwhelmed by all of your support and will continue standing up for FACTS and #NY21. Join me in this fight and donate today! https://t.co/tVW9NvZSMx

Elise Stefanik is just a liar. Half of this hearing process from the GOP side has been about propagating conspiracy theories meant to exonerate Russia and inculpate Ukraine. That’s what “Crowdstrike” is about. Claiming otherwise is just a lie.