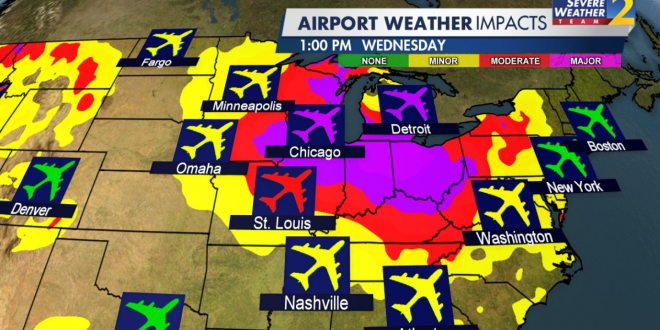 A trio of storms packing heavy snow and hurricane-force winds wreaked havoc Wednesday for Americans on the move for the Thanksgiving holiday.

On one of the busiest travel days of the year in America — an estimated 55 million people planning to drive or fly — highways in the West and Midwest were closed because of snow and hundreds of flights were canceled.

An extremely active weather pattern is in place across much of the US,” the National Weather Service said. A snow storm that caused near white-out blizzard conditions in Colorado dumped a foot of snow in Wyoming on Tuesday.

It’s the perfect recipe for a Thanksgiving travel nightmare. Not one, not two, but three powerful storm systems will make travel difficult to near impossible at times both before and after Thursday’s holiday.

A record-breaking “bomb cyclone” crashed ashore in the Pacific Northwest on Tuesday night, bringing winds gusting over 100 mph and feet of snow in some areas. That storm system will continue to dump snow in the Sierra Nevada while bringing heavy rain, coastal flooding and even isolated thunderstorms to Southern California. It will also spread rain and snow into Utah, Nevada and Colorado.

Meanwhile, a “kitchen sink” storm barreling through the Plains and Upper Midwest has already manifested itself in offering the worst of every season. Tornadoes touched down in Louisiana, while thundersnow and thundersleet rattled Nebraska. This is coming on the heels of Denver’s snowiest day in three years.

At this writing Flight Aware is showing 7126 delayed flights and 505 canceled flights.

On the day before Thanksgiving, storms have choked transportation in much of the United States. Widespread storms have already led to closed interstates and hundreds of canceled flights, and more travel chaos is predicted. Follow our live updates. https://t.co/n6fwqECWVC

Passengers sleep on cots at Memphis airport after canceled flighthttps://t.co/zCTdMbmqPQ