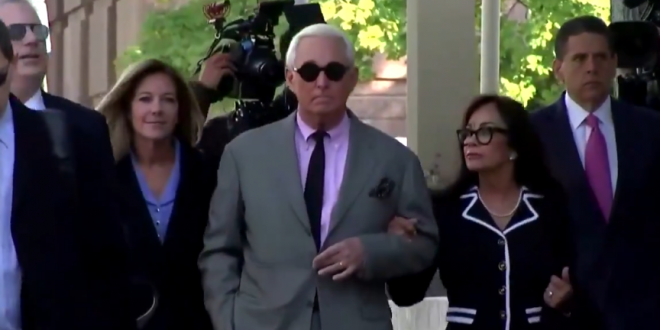 Jury selection in the trial of Roger Stone, the longtime confidant and adviser to President Donald Trump, got off to a bizarre start on Tuesday as Stone left the proceedings due to what he said was food poisoning shortly after an observer was taken out of the courtroom on a stretcher after appearing to have a seizure.

The selection of the jury continued without Stone present, but because of the earlier delay stemming from the separate medical emergency, it is unlikely jury selection will be completed Tuesday. More than 80 prospective jurors arrived at federal district court in Washington, D.C., to potentially take part in the trial.

Stone, 67, is accused of lying to Congress and pressuring another person to do the same. Stone’s case stems from former special counsel Robert Mueller’s investigation of Russian interference in the 2016 election.

Roger Stone’s trial starts today, so today seems like a good day to reminisce on that night Roger Stone got drunk and called me a “stupid b*tch”, then admitted he had a “secret backchannel” to Julian Assange and threatened to “crush me” in court. Lol. pic.twitter.com/TCAiqRyMhV

So a recess was called at Roger Stone’s trial after a man screamed and started seizing in the courtroom. Separately, Roger Stone apparently hid in the bathroom for over 30 min, and his wife was overheard asking if he was okay.

I’m covering the Roger Stone trial today. Part of Stone’s legal defense has been funded through the sale of signed Roger stones. pic.twitter.com/opUaLIqRfI

VIDEO: Roger Stone walks into to the courthouse to begin his 1st day of trial.

Proud Boys supporting him chanted from across the street. I asked if Stone has a message for his supporters; he declined to comment because he says it would violate courthouse rules. #RogerStoneTrial pic.twitter.com/btyOGDgaBz

Here, they huddle for a prayer ahead of marching over to the courthouse. I’ll be live soon at https://t.co/j6I8lNTpRc pic.twitter.com/wcGifvH2Hd

Rare Interview: Roger Stone on whether he believes President Trump will pardon him, should he lose his criminal case.

Says he hasn’t spoken with his onetime close ally in a while.

Previous McConnell: Senate Will Acquit Trump Quickly Because 2020 Democrats Will Want To Get Back To Campaign
Next Hillary To Dems: Pick Someone Who Can Win Electoral College And Then “Close Ranks” Behind The Nominee