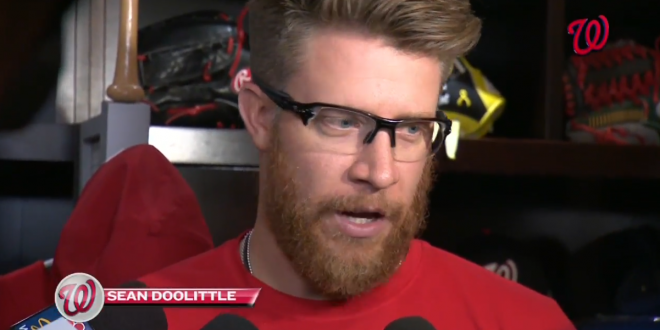 Ever since Sean Doolittle was traded to the Washington Nationals in the summer of 2017, the reliever was often asked whether he would visit the White House after winning the World Series. He pondered but never answered. He thought it would be hollow to respond — like discussing a hypothetical lottery win — because the Nationals fell short in his first season and didn’t make the playoffs the next year.

But then the Nationals became World Series champions when they beat the Houston Astros on Wednesday. Then Doolittle, long known for his liberal opinions and willingness to share them, had a real decision to make. Doolittle chose to not attend a White House ceremony slated for Monday. He is the first Nationals player to publicly confirm that, although multiple people close to the team said a handful of players are wrestling with the decision.

World Series Champion Sean Doolittle will not be attending the White House due to Trump’s “divisive rhetoric” Trump’s “enabling of conspiracy theories” and “widening the divide” in America. “I don’t wanna hang out with somebody who talks like that.” “I just can’t do it.” Awesome.

Sean Doolittle: “I have a brother-in-law who has autism…How would I explain that to him that I hung out with somebody who mocked the way that he talked, or the way that he moves his hands? I can’t get past that stuff.”https://t.co/B8sLqc6u1D

“People say you should go because it’s about respecting the office of the president. And I think over the course of his time in office he’s done a lot of things that maybe don’t respect the office.” – Sean Doolittle https://t.co/LO65WWJ9cH

World Series trophy review:
– v shiny
– hard to drink from (we tried)
– impossible to eat cereal out of
– heavier than it looks
– can be worn like a hat
– still in one piece (barely)
– says 2019 World Champions on it
– IS BACK IN DC AND WE CAN’T WAIT TO SHARE IT WITH YOU pic.twitter.com/aU5VpF9WGn