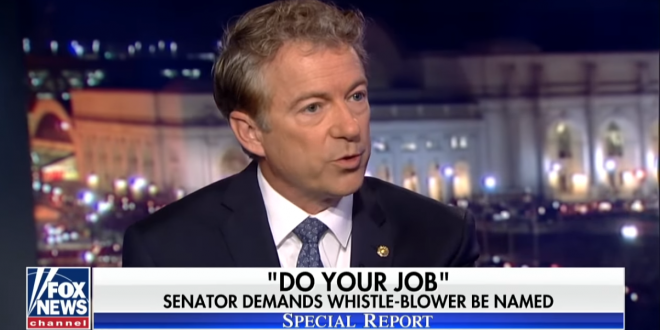 Sen. Rand Paul (R-Ky.) said on Tuesday night that he might disclose the name of a whistleblower whose complaint about President Trump’s actions toward Ukraine spurred the House impeachment inquiry. Asked why he hasn’t disclosed the name of the unknown individual, Paul told reporters that he “probably will.”

“I’m more than willing to, and I probably will at some point. … There is no law preventing anybody from saying the name,” Paul told reporters. Paul doubled down on potentially publicly releasing the whistleblower’s name during an interview with Fox News’s Bret Baier on Tuesday night, saying that he “may” disclose the name.

“There’s nothing that prevents me from saying it now,” Paul said. Questioned on why he didn’t go to the Senate floor and disclose the name as part of a speech, he added, “I can, and I may, but I can do it right now if I want. Nothing stops me.”