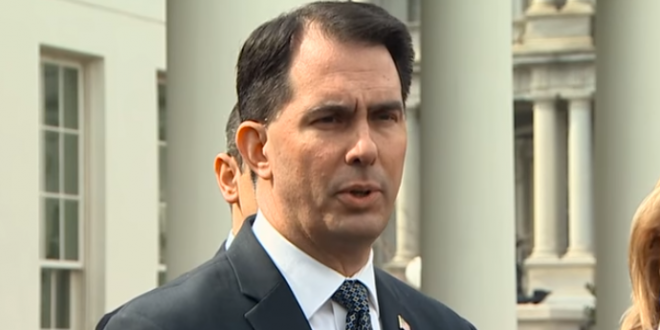 Wisconsin Governor Tony Evers has gone back to calling the evergreen on display at the state Capitol a holiday tree, reversing his predecessor who declared it a Christmas tree. Former Governor Scott Walker made his displeasure known on Twitter.

In 2007 the Republican-controlled state Assembly passed a resolution to call the tree a Christmas tree, but it died in the Democratic-controlled Senate. Walker, the son of a Baptist minister, declared the tree a Christmas tree when he took office in 2011. Twitter users on Friday were quick to point out that Walker did not seem particularly familiar with Jewish customs.

Evers, a Democrat, called the tree a holiday tree on Friday. He announced the tree’s theme will be “Celebrate Science” and asked schoolchildren to submit science-related ornaments to adorn the tree.

This is a Menorah candle this is lit during the Festival of Lights as part of Hanukkah.

This is not a holiday candle holder. pic.twitter.com/3pUUr2vBEL

This is a menorah that is used by people celebrating Hanukah. This is not a regular candle holder. pic.twitter.com/OAvkAp1eBH

“No one knows about this, but it’s getting recognized more and more.”

This is a ham sandwich pic.twitter.com/hCEcpvkBCL

This is not a holiday tree. pic.twitter.com/KcF2ZJxtTJ

Colloquially, these are called Drumpf’s used tampons, but their scientific name is @LindseyGrahamSC pic.twitter.com/3YGRcCCSP7

This is Scott Walker with a now-convicted Russian spy.

It is not an American patriot with a nice girl who like guns. pic.twitter.com/xpggQ2PJ5j

This, too, is a Christmas tree.

Like you and your party, it’s just a lot of dicks. pic.twitter.com/pIE4YXgBnI

MAYBE SHE’LL STOP CRYING IF I TELL HER IT’S A “CHRISTMAS” CAGE, NOT A “HOLIDAY” CAGE !!! pic.twitter.com/4sNgW8IifF

Type this word on your iPhone and look what emoji comes up:

When I type “Scott Walker” in my phone this pops up! Weird right??? pic.twitter.com/NN7q3nasHV

Be strong and courageous. Do not be afraid or terrified because of them, for the Lord your God goes with you; he will never leave you nor forsake you.

I’m too drunk to taste this chicken