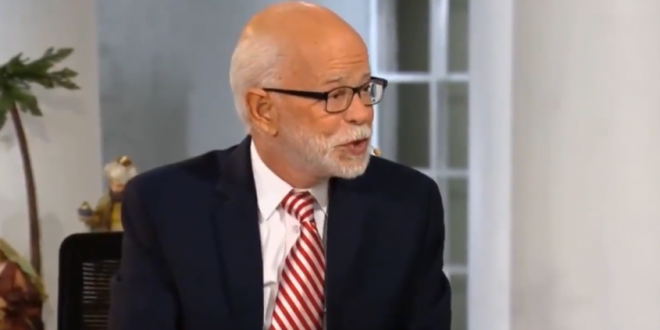 Scamvangelist Jim Bakker: Remember When It Was Illegal For Stores To Say “Merry Christmas”? [VIDEO]

“I’m afraid if things keep going the other direction, even Christmas will be outlawed. They tried to outlaw it already. You know that. In fact the stores, a couple of years ago, weren’t allowed to say ‘Merry Christmas.” Did you know that? I’m serious.

“One of the greeters at a big store here in Branson, she said, ‘Can’t say Merry Christmas anymore. It’s against the law.’ But we complained! And the people that watch our show called and contacted their stores.

“Other people got on the bandwagon and it turned around we can say ‘Merry Christmas!’ You may not love our president, but I’ll tell you one thing – he SAYS it! ‘You can say Merry Christmas as long as I’m president!'” – Jim Bakker, on his slop bucket grifting extravaganza.

Remember when it was illegal to say “Merry Christmas” just a few years ago? Jim Bakker does. pic.twitter.com/XxaMZtYf6X