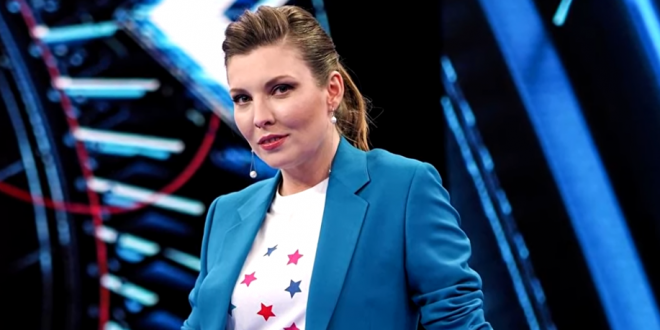 From the long-debunked “Crowdstrike” cyber plot positioning Ukraine as the fall guy for what undoubtedly was Russian interference in the 2016 elections, to anti-Semitic conspiracy theories centering around Jewish financier and philanthropist George Soros, rivers of Russian dezinformatsiya are flowing down from the President of the United States and the GOP, through the impeachment hearings, to Trump’s cult-like devotees.

The Kremlin also enjoys the Trump-GOP treatment of the Mueller report as a colossal hoax, or even a joke, letting Russian President Vladimir Putin off the hook, and putting him in a position to make light of the whole matter.

Russian experts and state media propagandists constantly reiterate that President Trump cannot and will not be impeached, because the Republicans are controlling the Senate. Olga Skabeeva [photo], the host of Russian state television news show 60 Minutes, mockingly told some sacrificial Ukrainian panelists: “We appointed Trump and you can’t unseat him.”