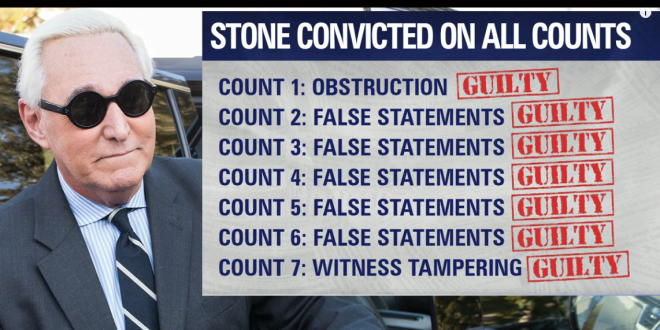 Roger Stone Clutched Bible As He Arrived For Verdict

Before the verdict was announced, Roger Stone, 67, arrived at the courthouse clad in a pinstripe suit, blue tie with white dots, white handkerchief in his pocket, arm in arm with his wife, sunglasses in one hand, a small red copy of the Bible in the other and a smile on his face.

When the verdict was read, Stone faced the jury of nine women and three men, and showed no outward signs of emotion as he was pronounced guilty.

U.S. District Judge Amy Berman Jackson set a sentencing date of Feb. 6. She rejected a prosecution bid to have Stone jailed until then. Six of the criminal counts each carry a maximum sentence of five years in prison and the seventh carries a maximum term of 20 years. Stone is likely to get far less time as a first-time non-violent offender.

Bible-clutching Roger Stone got the good book from a bad man. This is his “spiritual advisor”. No it’s not Paula. It’s Randy Lancaster-Short. A black pastor who denounces the Congressional Black Caucus. https://t.co/3VidFPgHoh pic.twitter.com/v5QVNd0HKG

Oh look Roger Stone is holding a prop bible. Nice try Rog baby, but no one is buying it. pic.twitter.com/wMQb0w6tTv