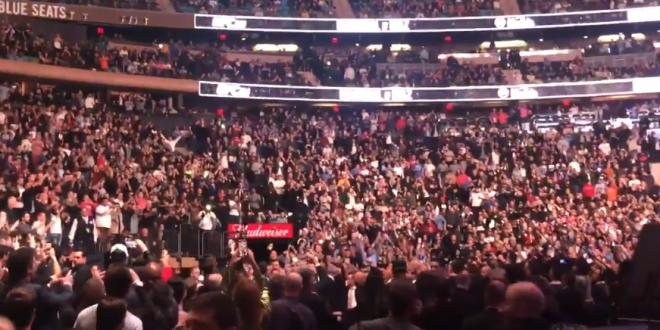 RNC Paid $60K For Trump To Get Booed At The Garden

President Trump’s cage-side seats to a fighting match in New York City cost the Republican National Committee about $60,000, according to officials familiar with the cost. The price included the ringside seats for Trump and his guests, catering and security, one of the officials said. The president’s guests included House Minority Leader Kevin McCarthy and Reps. Mark Meadows and Peter T. King , all Republican allies, along with his two adult sons.

It was unclear what each ticket cost, as one official said the $60,000 total tab included catering and security. Public ticket prices before the event ranged from about $100 to nearly $700. According to House ethics rules, lawmakers may accept free sporting event tickets if the event is a “bone fide” fundraiser, but the Saturday event was neither a campaign event nor an official fundraiser.

The media is being ridiculously unfair to Trump. This is just the latest example. They’ll run clips of Trump being booed at the World Series and UFC, but no one shows clips of him receiving a loud standing ovation at the 2019 White Supremacist Olympiad.#TrumpBooedAgain

Trump was loudly booed during his arrival to this UFC fight — the second sports arena to boo him in as many weeks pic.twitter.com/nFDAAjp5c4