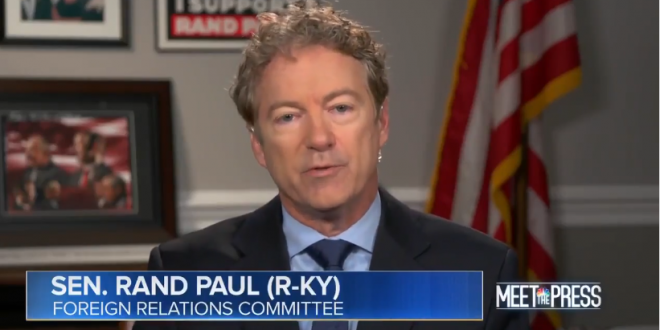 Rand Paul: Trump Has “Every Right” To Extort Ukraine

“I think we’ve gotten lost in this whole idea of quid pro quo. If you’re not allowed to give aid to people who are corrupt — there’s always contingencies on aid. Presidents since the beginning of time have resisted Congress and there’s been this sort of back and forth jockeying over what is sent.

“But also presidents have withheld aid before for corruption. I think it’s a mistake to say, ‘Oh, he withheld aid until he got what he wanted.’ Well, if it’s corruption and he believes there to be corruption, he has every right to withhold aid.” – Sen. Rand Paul, speaking this morning on Meet The Press.

. @RandPaul says the WH is making “a big mistake” to argue there was no quid pro quo. He would lean into it, arguing “every politician in Washington, other than me virtually,” tries to manipulate Ukraine. #MTP #IfItsSunday

WATCH: @SenRandPaul says “it is a big mistake for anybody to argue quid pro quo,” and “there is always contingencies on aid” #MTP

“Every politician in Washington other than me, virtually, is trying to manipulate Ukraine to their purposes” pic.twitter.com/fVGR8D2UKY