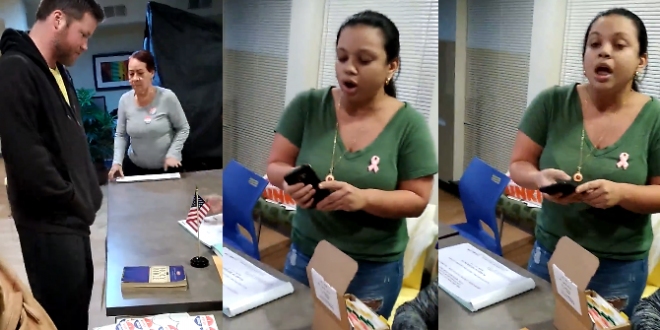 “I have asked these poll workers nicely why the Bible is displayed at the polling place. I have tried to explain to them that they cannot leave it out after they are sworn in because it is intimidating to non-Christian voters,” says a Philly resident and self-described “middle-aged white woman” who goes by Veronica.

When Veronica went to vote on Nov. 5 at Ward 18, Division 15 and asked again about the Bibles, she was met with resistance. In a video she shared with PW, a poll worker can be seen approaching her, getting increasingly irate and demanding to not be filmed.

Veronica alleged that one poll worker “assaulted me, hit me and grabbed at my phone.” While the video cuts do not show a confrontation between Veronica and the poll worker, the worker is heard telling Veronica that she’s going to “shove that phone up her ass.”

Having a Bible at all isn’t the issue. Poll workers are sworn in to begin their day, and they might want to bring their own Bible for that purpose, but after that, it’s supposed to be put away. Last year, there were issues when voters noticed bibles right on the table where they signed in to vote.

In November, the city instituted new rules that said bibles had to be put away after the oath. It didn’t help. The Bible shouldn’t be on the table. Those poll workers should be fired — or at least never allowed to work on Election Day again.

Jesus is love, you guys.