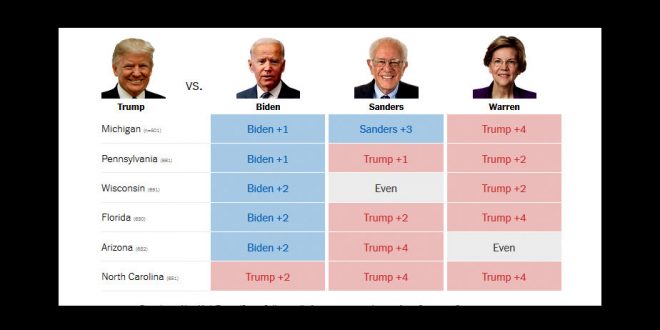 Despite low national approval ratings and the specter of impeachment, President Trump remains highly competitive in the battleground states likeliest to decide his re-election, according to a set of new surveys from The New York Times Upshot and Siena College.

Across the six closest states that went Republican in 2016, he trails Joe Biden by an average of two points among registered voters but stays within the margin of error. Mr. Trump leads Elizabeth Warren by two points among registered voters, the same margin as his win over Hillary Clinton in these states three years ago. In national polls, Mr. Trump’s political standing has appeared to be in grave jeopardy.

His approval ratings have long been in the low 40s, and he trails Mr. Biden by almost nine points in a national polling average. But as the 2016 race showed, the story in the battleground states can be quite different. Mr. Trump won the election by sweeping Michigan, Pennsylvania, Wisconsin, Florida, Arizona and North Carolina — even while losing the national vote by two points.

Among registered voters, Biden narrowly leads Trump in four of them, Sanders in three, Warren in one.https://t.co/GAAyNsZnED