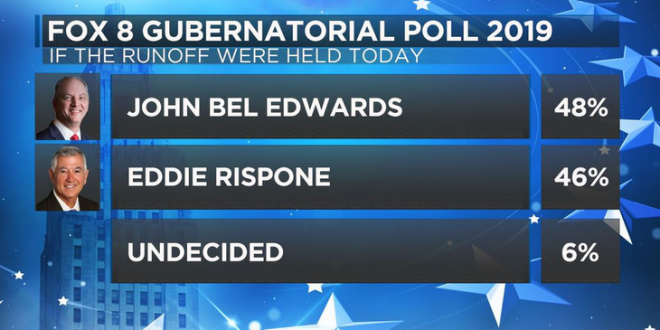 An exclusive FOX 8 News poll days ahead of the Louisiana Gubernatorial runoff election reveals incumbent Democrat John Bel Edwards with a slim lead over Republican Eddie Rispone. The poll of 625 registered Louisiana voters shows Edwards with 48 percent of the vote while Rispone has 46 percent.

Six percent say they are still undecided with less than a week to the Nov. 16 election.

“I love the state. I love the people. I love the whole thing. You have a great location. You have so many advantages because of where you are. It’s been a really incredible state for Trump.”

All these quotes have come in the past week from the President of the United States — a display of a strikingly obvious affinity for a place that can hardly be considered a swing state. If you haven’t picked up on it, Donald Trump LOVES Louisiana. (And a lot of Louisiana loves him back.)

Trump will be returning to Louisiana for his second rally in less than two weeks to whip support for Eddie Rispone, the Republican gubernatorial candidate campaigning to unseat Gov. John Bel Edwards, the only Democratic governor in the Deep South.