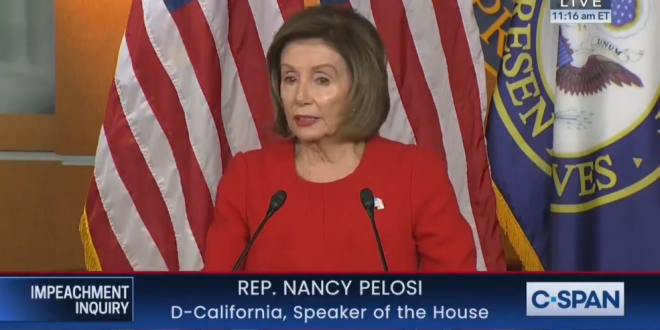 House Speaker Nancy Pelosi said on Thursday that Republican President Donald Trump has admitted to actions that amount to bribery in the Ukraine scandal at the heart of a Democratic-led impeachment inquiry.

“The bribe is to grant or withhold military assistance in return for a public statement of a fake investigation into the elections. That’s bribery,” Pelosi said at a news conference. “What the president has admitted to and says it’s perfect, I say it’s perfectly wrong. It’s bribery.”

“By the way, what President Trump has done on the record in terms of acting to advantage a foreign power to help him in his own election and of the obstruction of information about that, the cover-up makes what Nixon did look almost small. Almost small.”

PELOSI notes that Trump has the right to testify before impeachment investigators if he wants to make a case, then adds, “the president is not above the law. The president will be held accountable, & nobody should have the right to endanger whistleblowers.” pic.twitter.com/49IVuESiWb

Pelosi explains why she thinks that when it comes to Trump and Ukraine — as with many other Trump scandals — “all roads lead to Putin.” pic.twitter.com/mUjXqtkUBd

Pelosi with some serious shade for Trump: “If the president has something that is exculpatory — Mr. President, that means you have anything that shows your innocence — then he should make that known … so far we haven’t see that.” pic.twitter.com/2BMVk8wrgo

PELOSI: “What President Trump has done on the record in terms of [the cover up] … makes what Nixon did look almost small.” pic.twitter.com/yl7Gcv3c1I