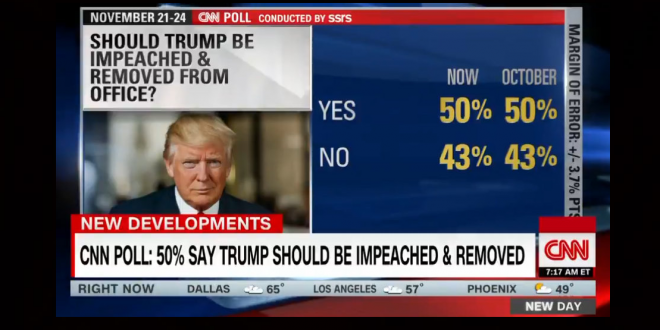 After five days of public hearings in House Democrats’ impeachment inquiry into Donald Trump, public opinion over whether the President ought to be impeached and removed from office remains exactly the same as it was in October, according to a new CNN poll conducted by SSRS.

Half of Americans say Trump should be impeached and removed from office, 43% say he should not. Neither figure has changed since October, with support for impeachment remaining at its highest level thus far in CNN polling.

Independents are closely divided on the question, 47% in favor, 45% opposed. Opinions on both sides are deeply held, with about 9 in 10 on either side saying they feel strongly in favor or against it.

A new CNN poll shows a growing gender gap on impeachment and presidential approval. There is now a 20-point difference between men and women on Trump’s overall approval rating (52% of men approve vs. 32% of women.) @ForecasterEnten has the numbers.https://t.co/gjvKLaL2jN pic.twitter.com/tvmbhkeivc

BREAKING: New CNN poll undermines @RealDonaldTrump claim that support for impeachment is dropping. It is NOT.

“Poll shows Dems losing interest in Impeachment inquiry all across the board. These Polls are actually devastating to the Democrats. But the writing was on the wall. He’s done so many great things. He’s devastated ISIS & killed AlBaghdadi, building Wall.” Jason Meister @FoxNews

Support for Impeachment is dropping like a rock, down into the 20’s in some Polls. Dems should now get down to work and finally approve USMCA, and much more!