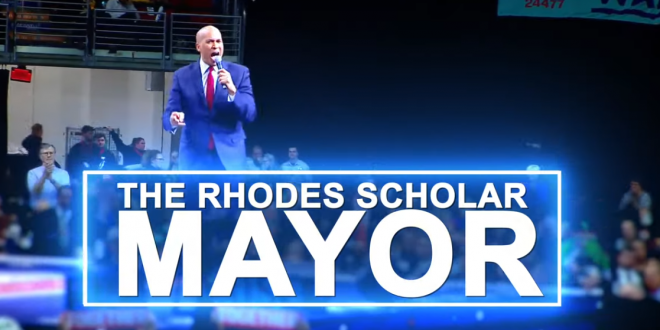 “He’s a Rhodes Scholar. A successful mayor. A uniter,” says the narrator in a new television ad set to air in Iowa. But the ad, which will begin airing Tuesday in Des Moines and Cedar Rapids, does not describe South Bend, Indiana, Mayor Pete Buttigieg.

“No, not that guy,” the narrator says, as an image of Buttigieg flashes on screen. “It’s Cory Booker.” Although Buttigieg is most often mentioned as a recipient of the prestigious Rhodes scholarship, Booker is the “Rhodes Scholar mayor” who “has what it takes to beat Donald Trump,” a narrator says in the ad.

The spot plays off a memorable moment in the most recent Democratic debate, when Booker referred to himself as “the other Rhodes Scholar mayor on this stage,” in a not-so-veiled nod to Buttigieg.