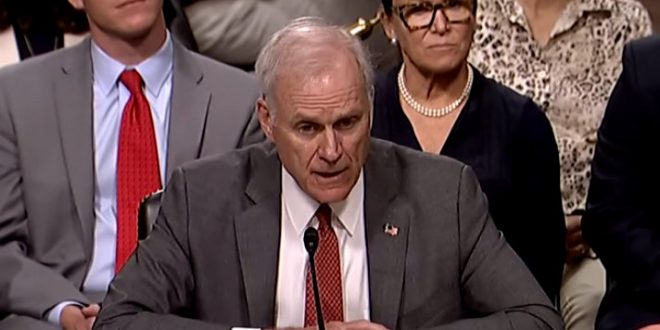 Defense Secretary Mark Esper fired Navy Secretary Richard Spencer Sunday over his handling of the case of a Navy SEAL who posed for a photo next to an Islamic State terrorist’s corpse in Iraq, and the SEAL will be able to keep his Trident pin, a Pentagon spokesman said Sunday.

“Secretary of Defense Mark T. Esper has asked for the resignation of Secretary of the Navy Richard Spencer after losing trust and confidence in him regarding his lack of candor over conversations with the White House involving the handling of Navy SEAL Eddie Gallagher,” Pentagon spokesman Jonathan Hoffman said in a statement Sunday.

Spencer’s resignation came in the wake of the controversial case of Chief Petty Officer Edward Gallagher, a Navy SEAL who was accused of war crimes on a 2017 deployment. He was acquitted of murder but convicted in July of posing with the corpse of a captive.

Esper asked for Spencer’s resignation after learning that he had privately proposed to White House officials that if they did not interfere with proceedings against Gallagher, then Spencer would ensure that Gallagher was able to retire as a Navy SEAL, with his Trident insignia.

Spencer’s private proposal to the White House — which he did not share with Esper over the course of several conversations about the matter — contradicted his public position on the Gallagher case, chief Pentagon spokesman Jonathan Hoffman said in a statement.