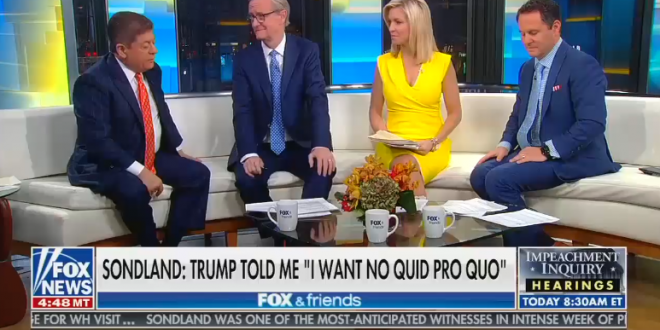 “So the ambassador is not a never Trumper. He is not a Democrat. He’s not somebody wanting to disrupt. This is the guy who’s given a million dollars to the Republican Party and is the most important Trump-nominated ambassador in Europe. And he’s saying this is what happened.

“The president wanted an announcement about Burisma, he didn’t care if there was an investigation. He just wanted the announcement so he could use it. And we know that the money was held up for 55 days. The president didn’t tell me that, because the president doesn’t say those things.

“He communicates through Rudy. Because the president knows from years when he did that here — communicate through the lawyer — that there is no attorney-client privilege in impeachment. And that’s why Rudy won’t testify.” – Andrew Napolitano, on Fox & Friends.

Suffer through and watch this clip.