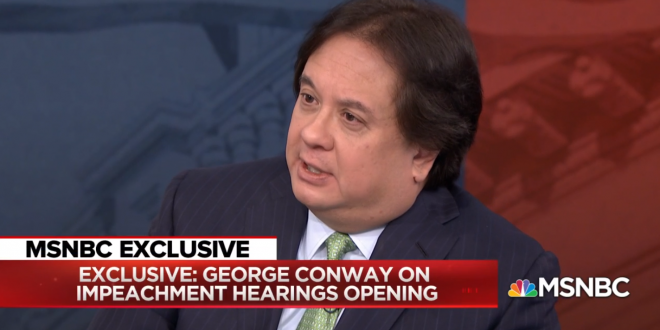 Kellyanne Conway’s attorney husband George Conway, daily Trump nemesis and critic, made an appearance Wednesday morning on MSNBC ahead of the first public impeachment hearings in the House of Representatives.

“The problem with Donald Trump is, he always sees himself first,” he said. “Trump is all about Trump. And that’s why it was inevitable he’d get himself into this soup once again, and that’s what this is all about.”

Conway said this is not about party loyalty, but putting the country, law and truth above partisanship. He said he is “horrified and appalled” that Republicans don’t see the situation that way. “If you had told me three years ago that it would come to this, I wouldn’t have believed it,” he said.