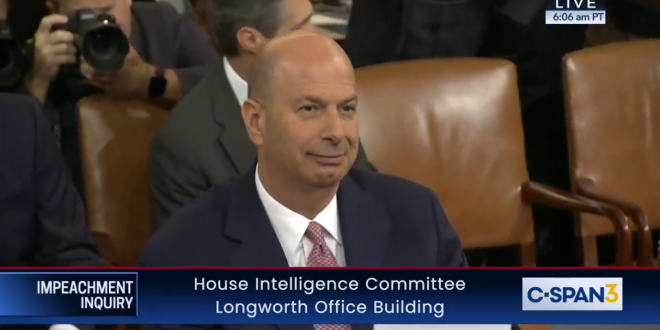 Three more witnesses are scheduled to testify in two sessions Wednesday in the impeachment inquiry into President Donald Trump’s request for Ukraine to pursue political investigations.

Among them is U.S. Ambassador to the European Union Gordon Sondland, who is expected to appear at 9 a.m. ET. Sondland has become a key figure because he is an ally of Trump, but also testified about demands for investigations that were made of Ukraine while military aid was withheld.

In the afternoon, the committee will hear from Laura Cooper, a deputy assistant secretary of Defense for Russian, Ukrainian and Eurasian affairs, and David Hale, the undersecretary of State for political affairs.

Previous Pompeo: I’m Proud Of Our Ukraine Accomplishments
Next ISRAEL: Another Attempt To Form Government Fails