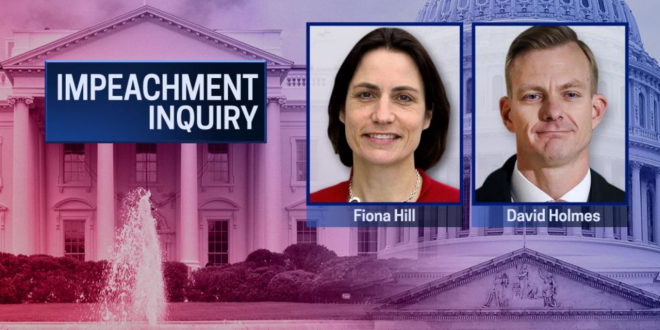 House Democrats are set to close their second week of public impeachment hearings Thursday with testimony from two witnesses expected to detail events inside the White House and a key conversation involving President Trump.

Scheduled to appear are Fiona Hill, the well-known Russia expert who served until this summer as a top director on the National Security Council; and foreign service officer David Holmes, the political counselor at the U.S. Embassy in Kyiv. The hearing is scheduled to convene at 9 a.m. ET.

Hill is expected to tell lawmakers about the concerns she had with the merits of the Ukraine affair, in which Trump sought concessions from Ukraine’s president in exchange for engagement and continued financial assistance that had been authorized by Congress.