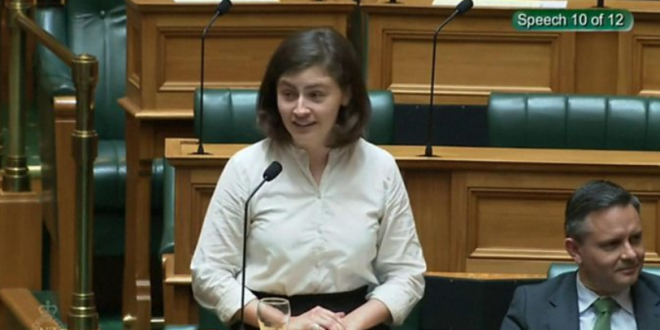 A 25-year-old New Zealand lawmaker shut down a heckler during a climate change speech with a two-word comeback aimed at older people. Chlöe Swabrick, who belongs to the Green Party, silenced a fellow Parliament member by retorting, “OK, boomer” — a phrase popularized by young people to call out folks from the baby boomer generation.

The phrase has grown in into a well-used meme over the last few months, first made popular by users on the social media app TikTok.

A New York Times column recently summed it up as a “rallying cry for millions of fed up kids” and said it’s used as a reply to “basically any person over 30 who says something condescending about young people — and the issues that matter to them.”

WATCH: That “OK boomer” meme going around? It spiked when 25-year-old New Zealand MP Chlöe Swarbrick rebuked an older lawmaker who heckled her during a speech on climate change. pic.twitter.com/Du8E5aMzM7

Unpopular and non-woke opinion alert. @_chloeswarbrick rightly gets annoyed when people dismiss her on the basis of age. Shouldn’t do the same to those older. #okayboomer

I was talking about the generation that comes after us not having the luxury of ignoring this, all the while being met with a barrage of yelling. I then spoke about being 56 in 2050, and both Todd and Scott kept yelling. So I responded. Were you in the House?

We apologise for the error, and have updated the captions accordingly. Clearly we need to start doing all-office meme briefings.
Cordially,
– the @nzparliament social media team https://t.co/RbNNtmE64Z

Previous Trump Promotes Warning Not To Protest At Alabama Football Game But School Has Already Backed Down
Next REPORT: Trump Wanted Barr To Hold Press Conference Declaring That He Broke No Laws With Call To Ukraine