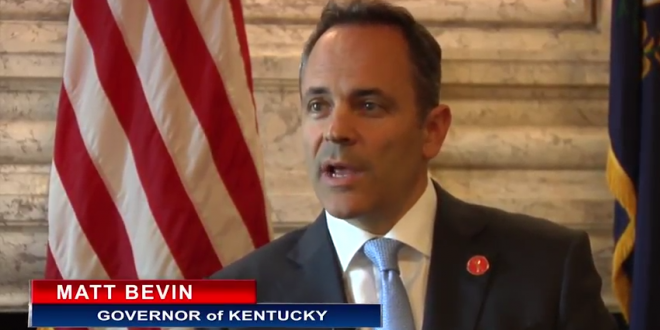 All 120 county boards of elections began a recanvass of the votes in Kentucky’s race for governor at 9 a.m. today. Gov. Matt Bevin requested the recanvass last week after he came up roughly 5,189 votes short of Democrat Andy Beshear.

In a recanvass, a county reviews printouts of their vote totals to make sure they transmitted the correct number to the secretary of state on Election Day.

Bevin has left open the possibility that he will continue to contest the election even if the recanvass shows that he lost, though some Republican legislators have signaled that the governor should concede the race if that is the outcome.

And after about 45 minutes of reading totals, and a few more minutes’ talk of weather and basketball over the rattling of adding machines, Mr. Beshear’s victory margin in Scott County was again 97 votes. No change. The reports that have come into the secretary of state’s office so far have showed much the same.

But there were reasons to believe Mr. Bevin might not stop with the recanvass , regardless of outcome. In his election night speech, Mr. Bevin spoke of “more than a few irregularities,” which the next day became “thousands of absentee ballots that were illegally counted.” He gave no specifics for the explosive allegations.

And so Kentucky finds itself asking: What happens if the recanvass leaves the result effectively unchanged? Would Mr. Bevin concede? Or would he take a step not taken in a Kentucky governor’s race in 120 years and formally contest the election before the State Legislature?

Previous SURVEY: 40% Of Evangelicals Say They Are Pro-Choice
Next BREAKING: Mass Shooting At California High School