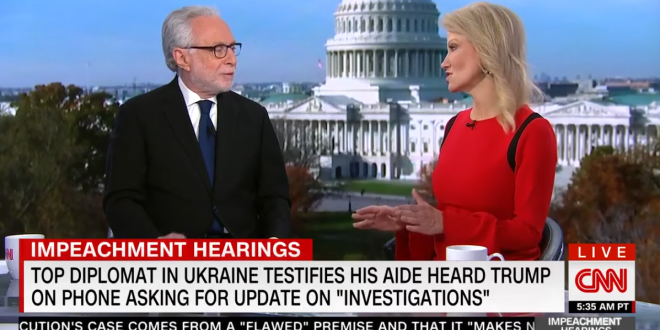 Kellyanne Conway Rages At Wolf Blitzer For Daring To Bring Up Her Husband: You Just Embarrassed Yourself

White House counselor Kellyanne Conway confronted CNN’s Wolf Blitzer after the anchor during a morning interview introduced a clip of Conway’s husband making critical comments of President Trump as part of MSNBC’s coverage of Wednesday’s impeachment hearing. Conway accused CNN of embarrassing itself by playing the remarks from frequent Trump critic George Conway, suggesting it was only doing so in a bid to drive ratings and make her look bad.

“It’s the same stuff all the time. What you just quoted is said every day by other voices but you wanted to put it in my husband’s voice because you think somehow that that will help your ratings or that you’re really sticking it to Kellyanne Conway,” she said after the clip was aired. “Where is the shame, where is the introspection,” Conway said. “I think you embarrassed yourself and I’m embarrassed for you because this is CNN now?” she said.

.@KellyannePolls is currently doing another word salad on CNN right now and literally has no defense of Trump. She continues to cite WH counsel letter which claimed that impeachment inquiry is illegitimate despite the fact that a FEDERAL COURT has rejected that argument.

In fact, that court characterized WH unwillingness to comply as “obstruction” and used that to *bolster* the need for Congress to be able to obtain documents.

Infrastructure, broadband, school kids who have no wi-fi (?)

.@KellyannePolls rips into @wolfblitzer who had the audacity to tell her that her marriage has “issues.” What does her marriage have to do with impeachment proceedings? So embarrassing for @CNN

On Fox & Friends, Kellyanne Conway dismisses the impeachment hearing as boring (“you tune in, you’re either sound asleep or you can’t follow”) and compares Kent and Taylor to “a bunch of gossip girls.” pic.twitter.com/SEG7YV7Z90

CNN finally discovers that @KellyannePolls‘ kryptonite is being shown her husband’s comments. They should do this with every one of her appearances. She gets defensive, overly sensitive, and way off her game.

Watching Wolf Blitzer interview KellyAnne Conway in my hotel room and wondering if the hotel will simply add the cost of the smashed TV to my bill.

Serious question (that I happen to be shouting in anger): WTF is the point of putting @KellyannePolls on TV?