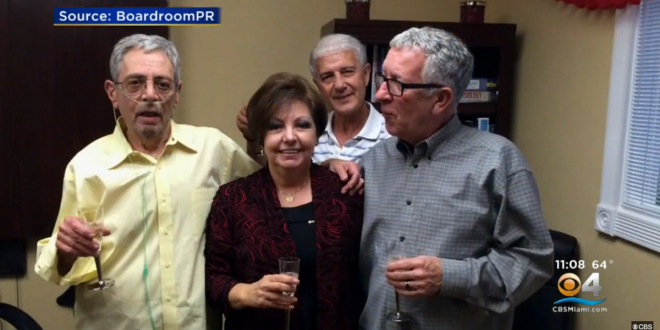 A Florida jury has awarded a gay man more than $157 million in a wrongful death lawsuit after his husband died from lung cancer caused by smoking cigarettes, in what an attorney said is the first such case involving a same-sex married couple. Edward Caprio was diagnosed in 1996 with chronic obstructive pulmonary disease. It would be 22 years before the disease killed him. He died early last year at 74.

A Broward County jury Friday ordered tobacco giants R.J. Reynolds and Philip Morris to pay his spouse, Bryan Rintoul, $157.4 million, including $9 million in compensatory damages. The cigarette makers were found equally at fault because Caprio smoked brands from both companies since he was 15. The jury blamed the tobacco companies for manipulating the addictive nicotine levels in cigarettes and marketing them to adolescents.  Caprio started smoking in the late 1950s.

Under Florida law, a spouse cannot sue for wrongful death unless the couple married before the onset of the illness. The jury agreed that that the couple, together for more than 35 years, would have married decades ago had they been legally allowed.