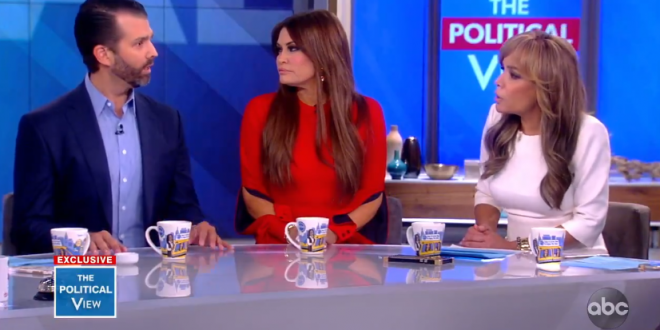 President Donald Trump’s son, Donald Trump Jr., appeared on ABC’s The View on Thursday to promote his new book “Triggered: How the Left Thrives on Hate and Wants to Silence Us.”

Donald Trump Jr. on Thursday defended his Twitter outing of the whistleblower who sparked the House impeachment probe against his father, as he also called the commander-in-chief “a counterpuncher” who has “got a pair.”

“I think the reality of the answer is the whistle-blower’s name was on a little website called the Drudge Report a couple of days ago. I literally quote tweeted an article that had the guy’s name in the title of the article,” Trump Jr. said.

Asked if that made it right, he decried what he said was a double standard, and said no one cared when an envelope with white powder was sent to his Manhattan home and opened by his then-wife, Vanessa Trump, in February 2018.

Guests clashed with hosts and hosts clashed with audience members at the ABC show on Thursday. “The booing is fucking us up,” The View co-host Whoopi Goldberg told the morning show’s audience during a commercial break on Thursday. “It’s messing with everyone’s mic. You can grimace and all that. All we hear is booing.”

Goldberg was trying to restore a sense of calm and civility after a rancorous first interview segment with Donald Trump Jr. and his girlfriend, former Fox News host Kimberly Guilfoyle. (The Hollywood Reporter attended the show as a member of the audience and took notes.)

At one point amid the cross-talk, panelist Joy Behar admonished Don Jr. and Guilfoyle, “Stop yelling!” Moderator Whoopi Goldberg told the table soon after, “Everybody stop, it’s hard to hear.” “This is not a MAGA rally, okay?” Behar told Don Jr. Meghan McCain, who has the most contentious relationship with the Trumps given the president’s history of attacking the late Sen. John McCain, her dad, did not speak for the first part of the joint interview.

Later in the episode, she asked Don Jr. if his family’s divisive political style — including attacking their critics in personal, sometimes vulgar terms — was “worth it.” She referred specifically to the Khan family, whose son died while in the military.  Don Jr. used his answer to pivot back to what he said were his father’s accomplishments as president but defended him as a “counter-puncher” who was merely responding to what Don Jr. called a historic level of vitriol.

“You and your family have hurt a lot of people…including the Khan family,” @MeghanMcCain says. “Does all of this make you feel good?”

Trump Jr: “I don’t think any of that makes me feel good, but I do think that we got into this because we wanted to do what’s right for America” pic.twitter.com/dcrTrxtB9I

.@HuntsmanAbby: “Who do you hope runs against your dad?”